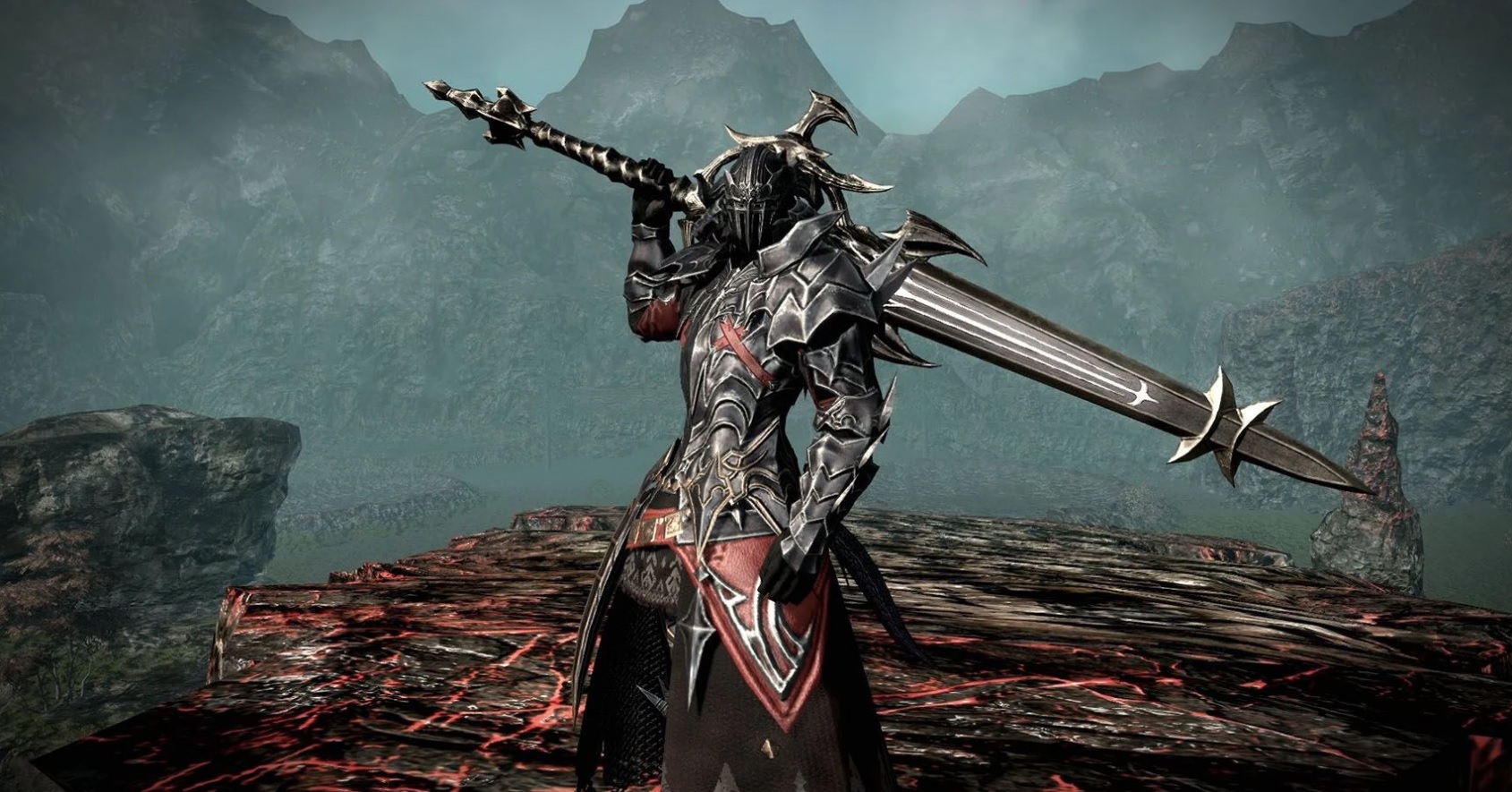 The Dark Knight position in Final Fantasy 14 is among the most adaptable Tanks in the game because of their capacity to empower their colossal greatswords with dark magicks, providing them a potent force on offense and defense. When they are not defending their allies from attacks that could be lethal, they are usually using special techniques to kill their enemies by draining their blood.

The Dark Knight's armor has the best defensive stats overall and is highly stylish and ominous in appearance, making them an unbeatable force on the battlefield. They won't dazzle anyone with excessive flash, but they will maintain their position and look stylish.

Birth of the Black Sword

In Final Fantasy 14, the vast number of Jobs usually demand you to complete a Class before acquiring the Soul Crystal needed to unlock them and scale them up. The Dark Knight, in contrast, just requires that you acquire the city of Ishgard and earn Level 50 using any other Disciples of War or Magic. Dark Knight can also be accessed as part of the free Final Fantasy 14 trial because it was released with the Heavensward expansion.

You are prepared to become the Dark Knight once you have reached Level 50 and acquired Ishgard. You can accomplish this by speaking with the Ishgardian Citizen in Coerthas in The Pillars and accepting the quest "Our End," which will grant you the Soul of the Dark Knight and several equipment components for the Job, enabling you to begin your adventure as a Dark Knight. Because the Dark Knight is a tank position, you will not be concerned about positional attacks because you'll almost always be in front of the adversary. However, you still will have to use basic attack rotations and, therefore, can inflict a lot of damage using them and your other skills even though you are the group's impenetrable barricade.

To avoid overloading you with all the tools, procedures, and responsibilities accompanying a class like the Dark Knight, the basic rotations listed below do not include any Off-GCDs.

Here is a brief description of all the crucial Off-GCD actions that you will be using more frequently than the others when using the Openers. Using Gils, you can buy and upgrade all armor and weapons and increase your health and attack stats. A decent amount of Gils can give you a headstart in the game and smooth your gaming experience.

You can purchase FFXIV Gils from our website MMOPixel. We provide the best service on the web.

Grit is the name of the Dark Knight's tanking posture (LVL 10). By activating this, you push yourself to the top of the enemy list and attract their attention. Make sure you are in this stance every time you visit a dungeon! You can only keep the enemy aggro if it's off.

The main tank must always engage its tank stance first in raids and eight-man trials. Read up before you prepare for any raids or trials as a tank because a lot hinges on the fight's mechanics regarding whether the off-tank activates its stance.

Generally speaking, the main tank should be the sole one attracting aggro if there is just one boss. It will be more difficult for DPS players to strike their positions if numerous tanks are vying for the boss's attention, twisting it around. One tank should only take minor damage if there are many bosses; thus, the off-tank should adopt a tank stance to catch them all. In particular, Dark Knights have many resources to handle during battle. You must keep tabs on your MP, Blackblood, Darkside, and Dark Arts. Fortunately, each of these components unlocks over time, allowing you to become familiar with them before needing to handle them all in one go.

The MP Gauge, which is located next to your HP bar, will be recognizable to you if you've ever played a caster. Three separate Dark Knight skills require MP (magic points), and you have several other skills that can restore it. Since attacks make up most of them, you'll naturally and swiftly refill this throughout combat.

Utilizing Edge of Darkness or Flood of Darkness will activate and extend the Darkside Gauge, which resembles a helmet. Darkside makes you do more damage, and the gauge will indicate how long you've been affected by its effects. The maximum duration of this timer is sixty seconds. It will continue to be active as soon as you are engaged in battle if you keep employing the Flood and Edge skills.

You can fill your Blood Gauge, which resembles a sword, by employing a variety of powers. Many of these skills are attacks, just like the MP Gauge; use a strike as soon as you have enough MP to use it, and the gauge will swiftly refill.

Above the Darkside Gauge, a little sword icon represents the Dark Arts. The shield is created when The Blackest Night breaches; it will brighten up, enabling you to cast Flood of Darkness/Shadow or Edge of Darkness/Shadow without wasting MP.

Regardless of what kind of material you're tanking as a Dark Knight, there are a few things you should keep in mind.

Never allow your Blood or MP gauge to reach its limit

You are wasting resources that could be used to boost your DPS if these gauges fill up. When you have the option, use the attacks that deplete these resources because most of your other skills will gradually replenish them.

Make a plan for using mitigation

Whether for boss tankbusters or dungeon pulls, ensure you always possess mitigation skills available. In other words, don't use up all of your mitigation at once. Your healers will appreciate the excellent mitigation you did.

In particular, combine it with other mitigation skills. By doing this, you can get free attacks while easing the pressure on your healer or healers.

After gaining this talent at Level 35, you can cast spells and land weapon skills to create MP and raise your Blood Gauge. Use it anytime it is available after cooling down to maintain the flow of MP since this is the main method of refueling your MP gauge in battle.

A surprisingly underrated and misunderstood aspect of Final Fantasy 14 is maintaining your materia. So naturally, specific jobs and roles will have significant opinions for the stats you should prioritize when syncing materia, acquiring weapons and armor, etc. Here are the numbers that a Black Knight should focus on, along with information on improving each trait.

If your level is below max, there is no point in melding materia. When you reach this stage and decide to take a job in high-end raiding materia, do not bother over melding your gear. If you max all the stats of your Dark Knight just before Endwalker drops, it is advised that you hold off on melding materials until you reach the new max level.

The FFXIV Dark Knight tour comes to an end here. If you want to learn how to tank or if you're going to transform your Warrior of Light into a genuine Warrior of Darkness, this is a fantastic job for you. Dark Knights have a wide range of attack types, several resources to handle, and a good degree of team protection. High-level material necessitates paying notice to enemy casts because Dark Knights are powerful at Level 80 for inflicting and preventing damage, making it crucial to watch out for enemy abilities. Remember to pop those protections and debuffs when you wish to aid your healers!