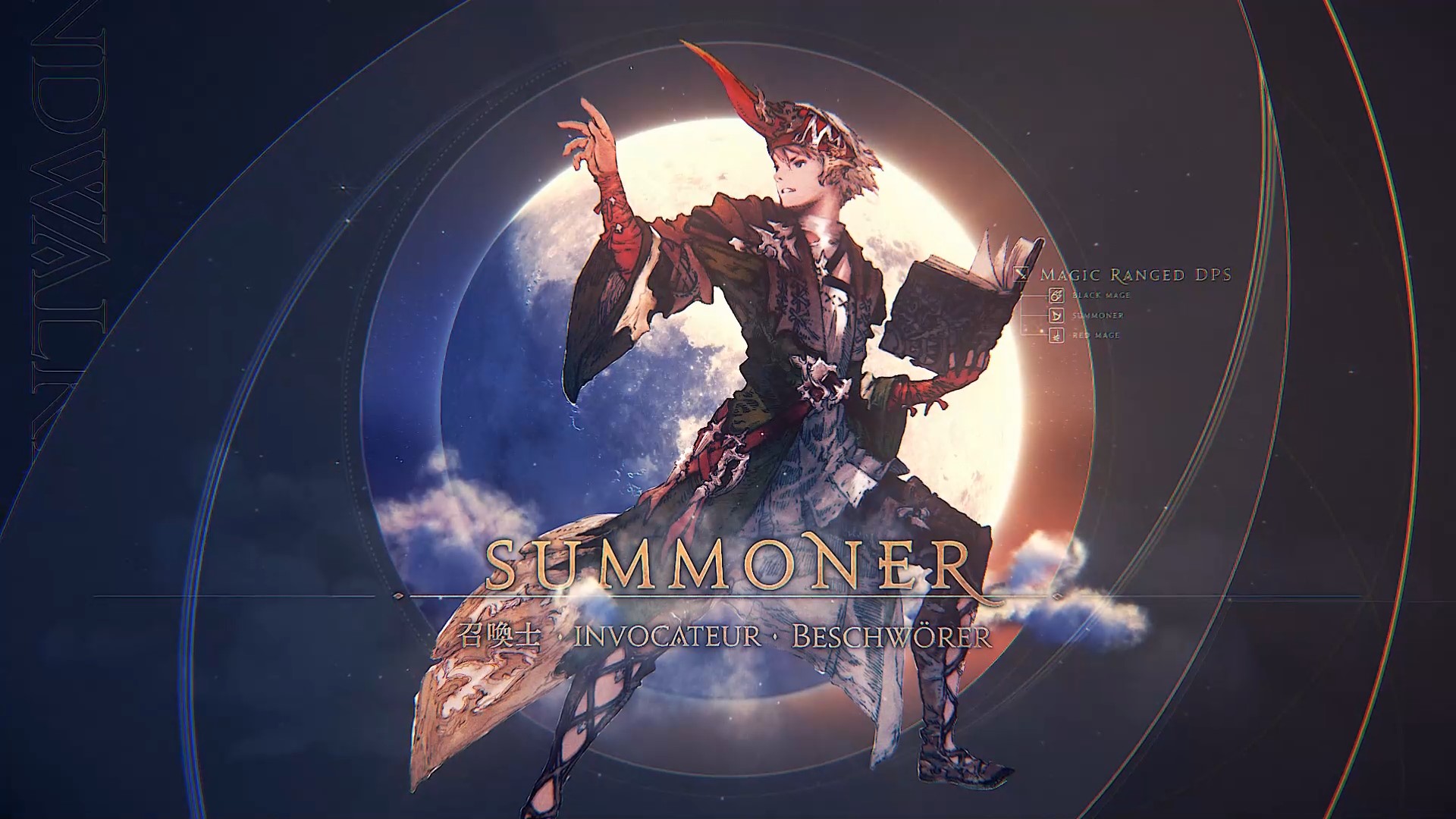 The MMORPG Final Fantasy XIV's Summoner class, which falls under the DPS category, is renowned for being one of the more complicated ones. It involves the player using magic to call forth a monster, such as a carbuncle, into war.

Strong damage output is one of Summoner's advantages, particularly in mob circumstances. In raids, where numerous foes can huddle together, they are highly helpful. They make excellent support because they can revive the party's healers if they are killed. With all these in mind, Summoner is a popular player choice. Fortunately for these gamers, there are hints and hacks that seasoned players have provided to aid novice Summoners.

The summoner class uses powerful primal and demi-primal summons to deal with magical ranged damage. Summoner is a simple job to play for advancement or other learning objectives because they keep a high level of mobility for free. The elemental attunement of these summons gives the Summoner special powers that can be employed each time they spawn and deal significant damage to their respective targets. The rotation loop for summoners is simplified, focusing on straightforward binary decisions about which skills to use at any particular time.

How do you get Summoner unlocked?

To unlock the Summoner, a player must reach at least Level #30in the Arcanist class. Talking with Murie at the Arcanist's Guild in Limsa Lominsa Lower Decks will help you locate the first quest, Way of the Arcanist, which will unlock Arcanist. The Austerities of Flame quest, which, when finished, will award you with the Soul of the Summoner job stone and unlock the Summoner Job, can be started by communicating to Thubyrgeim at Limsa Lominsa Lower Decks once you have reached level 30 and finished all of the associated Arcanist quests.

Players should improve their critical hits to exploit a Summoner's strengths fully. Savage Aim Materia is what players seek for critical hit numbers. Although there is less consensus among gamers, some prefer faster spell speeds to greater strikes. Regarding that patty

The size of Bahamut can be modified

Unfortunately, many gamers are unaware of this, which is sad because Bahamut can obscure some places during combat. A straightforward text command can modify the Bahamut's default size from medium to giant or tiny. For example, "/bahamutsize" is the command, followed by "large/medium/small." It's crucial to understand that Bahamut's size only affects the player when it changes.

There are good reasons why Titan-Egi is seldom featured in multiplayer content. It has shields, meager single-target power, and an AOE; thus, it is a bit of a mixed bag. Typically, a tank or other party member outperforms Titan. As a result, users have decided the Titan is for single-player content. In the absence of a tank, its shield is far more useful. The Ifrit-Egi is the best when facing off against lone opponents. Ifrit is typically the default summon used by gamers. The most damage is dealt, but only to a single target. Ifrit performs best in trials, some raid engagements, and most dungeon boss encounters. Many players use Ifrit for single-player content, although there is also a superior summon for such circumstances. For mobs, Garuda-Egi is best

The numerous entities and their varied skills are among the most frightening features of a Summoner. But seasoned Summoners have reduced these summons to little more than their defining characteristics and finest uses. The Garuda-Egi is the summoning of choice for mobs. AOE damaging over time applies to Garuda. This makes it perfect for simultaneous engagements with two or more foes. However, avoid using it in one-on-one combat as that is ineffective and requires a different summon. Before going into a trance, use Tri-Disaster

With Summoner, the Scholar will rank up

Scholar's ability to level up alongside the class is another distinctive feature of Summoner. Of course, the player doesn't need to learn to use Scholar simultaneously as their Summoner, but doing so could be advantageous. When waiting to enter a dungeon, test, or raid, a Summoner who is also a healer can transform into one for a shorter wait period. They ought to only do this, though, if they are truly capable of performing both the summoner and scholar functions.

But before entering the dungeon, equip yourself with up-to-date weapons. Use FFXIV Gil to buy weapons and armor for a smoother gameplay experience. If you are falling short of Gils, you can easily purchase them with real money.

To aid you, visit our website MMOPixel to purchase FFXIV Gils. We provide the cheapest rate on the web.

Keep in mind to summon again after recovering from a death

When a Summoner is revived, the first action they must take is to resummon their pet. It can be simple to overlook, particularly if the Summoner prioritizes survival. Nevertheless, without the pet, their ability to deal damage is limited, and some talents won't be present on the hotbar. Naturally, if the Summoner is resurrected in a hazardous area, they should find safety before resummoning their animal companion.

A Summoner's career depends significantly on damage over time. Cat Miasma and Bio on one or both enemies simultaneously with Tri-Disaster. Using Bane, distribute the poison among the gathered hordes after those spells have been cast. Keep doing this since any poisoned enemy will take more damage from your basic spells. Tri-Disaster is your best friend because this is especially true when they have both infections. The only DPS class that can revive other players besides Red Mages is Summoners. As a result, a Summoner may be crucial to a party's success in one of the game's various dungeons, raids, or trials, as opposed to wiping out the entire group. When healers are defeated, summoners should utilize Swiftcast and the Resurrection skills close together.

Use Enkindle Bahamut as soon as Bahamut is called,

The player should instantly click Enkindle Bahamut after calling Bahamut. The dragon will then unleash Akh Morn, a strike that deals tremendous damage to several opponents. Enkindling Bahamut right away will give the player enough time to perform this attack twice during Bahamut's summon.

The maximum quantity of times a player can Enkindle Bahamut to activate Akh Morn while he is summoned is twice. Therefore, if it is cast right away after being summoned, the second attack will have time to prepare.

Do not call Bahamut immediately

One of the thrilling aspects of being a summoner is Bahamut. The ability to summon Bahamut becomes available as soon as a player enters the Dreadwyrm Trance. However, summoners are expected to wait to press that button. Rather, a Summoner should give themselves as much time as possible to remain in a trance.

Because of the significant reduction in spell-casting time, the player can launch numerous attacks with great damage in a brief period. In order to reach the Bahamut phase of the rotation, they must be careful to take advantage of this trance and avoid rushing through it.

Unless otherwise directed, your pet fights what you attack

For a pet to attack an adversary different than the one it is now causing harm to, the owner must give the pet the appropriate command. A pet would always attack anything the player assaults on command. To achieve this, choose the target you want to obey, then click "obey" in the Pet Command hotbar. Finally, the "heel" button must be pressed to completely halt a pet from assaulting a target.

Knowing that "obey" will only cause the pet to attack using standard skills is good. Press "sic" to command the pet to use any pet-specific attacks against an enemy automatically.

Your Egi can be glamorous

In addition to having diverse designs, each summon has a different set of strengths. Most players like the cute, low-level carbuncles over the more advanced Ifrit, Garuda, or Titan-Egis. Such Summoners profit from the availability of the glamour summoning skill. Although a little tiresome, it only needs to be done once, and the creature can still be summoned without losing its allure. /egiglamour "egi name" "glamour," for instance, egiglamour "Garuda-Egi" "Ruby Carbuncle," must be entered by the player.

The DPS' Summoner Class can be difficult to handle initially, given it is one of the most complex classes available in the game. But, once you know about them and the features you get through them, it will be an almost smooth journey. You can unlock them easily by getting to level 30 in the Arcanist class. Once you unlock them, the main quests begin. Our article will help you understand the gameplay better and progress efficiently. This will be all from us for now. Stay tuned with us for more updates.