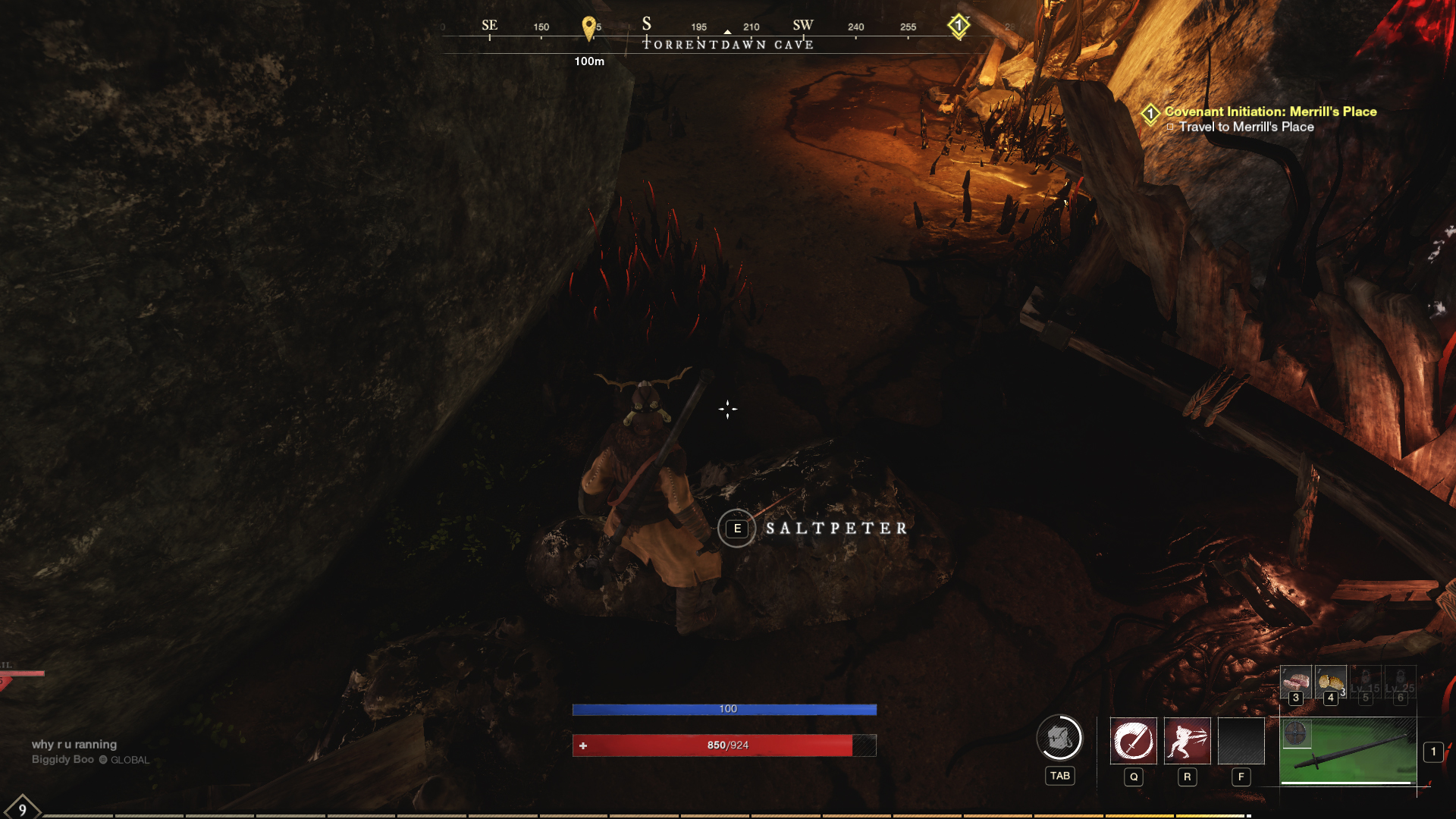 How to Find and Collect Saltpeter in New World

Amazon Games has released the open-world MMO game New World. The game's setting takes place on the enigmatic island of Aeternum, which was found in the latter years of the Age of Exploration. In a classless, real-time combat system, you can use deadly weapons or summon supernatural forces. For PvE and PvP conflicts, it can be played by one person, a small group, or large armies. Exclusive to the PC platform is New World.

The enormous geography of the New World is rich with priceless riches. Gathering, refining, and making abilities can be leveled up with the aid of resources in the New World. In addition, finding specific materials can significantly improve a player's character. Saltpeter is one such resource. In the New World, Saltpeter is extracted from ground-level saltpeter ore formations. By doing that, raw materials for crafting will be produced.

Saltpeter is one of the most "in limited supply" resources in the game. It is much more challenging to obtain enough for oneself because other players are also hunting for it. It can take some time before you can acquire enough Saltpeter. Saltpeter is a tier-one crafting material in the New World that is only really important if you want to use the Musket. Gunpowder is created from Saltpeter and is subsequently transformed into cartridges.

However, the game could advise you on where to locate Saltpeter. If you want to start shooting things but don't have enough ammunition, it can be a little frustrating. So, we'll go through some of the most significant locations in Aeternum's starting areas for obtaining Saltpeter. Although we'll update a few days after the game launches, keep in mind that everything is subject to change. Why is Saltpeter important?

Saltpeter is a precious resource in the New World that is required for many different crafting processes. But the most well-known item that Saltpeter produces is gunpowder, widely employed in manufacturing Musket cartridges. The process of creating cartridges is fairly involved because you need five Charcoal, two Flint, and one Saltpeter to make gunpowder.

They can now use it in their muskets after receiving their supply. For the abovementioned weapon, they can produce iron cartridges as well. Players will require the actual gunpowder, four iron ingots, and one piece of linen to manufacture them.

The aforementioned iron ingots can be produced by smelting iron ore, which is obtained by mining the game's numerous iron nodes, whilst the linen is produced by weaving fibers through a loom. In addition, hemp plants, which can be found in grasslands and woodlands, can be harvested for their fibers.

The iron cartridges can also be made in the Workshop using its Recipe Menu, just like the gunpowder. Insufficient farming of the making materials can result in gamers frequently running out of gunpowder. They must go to a Workshop if they want to make gunpowder. A gunpowder recipe can be chosen at the Workshop in New World. Players can make gunpowder and restock their supplies with a single click. Whenever they require more, they can repeat that process.

A Powder Horn, a decorative dwelling item for your character's residence, is also a craftable option. It was created at level 102 in furnishing, which is a lot of furniture. Points to consider before starting to gather Saltpeter

You require a mining pick to locate the Saltpeter's nodes, which is necessary for finding Saltpeter. The good news is that you can mine Saltpeter without a powerful mining pick. You can quickly make a Flint Mining Pick at any campfire if you don't already have one. One Flint and one Green Wood are required.

The pickaxes in the game come in a variety of different rarities, which accelerate your gathering as you advance in rank. A summary of each pickaxe in New World and the stat boosts it offers is given below:

Having high-rarity pickaxes will help you mine ore more quickly, which is one of the most crucial aspects of gathering these resources in the New World. Of course, you can increase your gather speed even further with perks and other equipment, but doing so will negate the benefits of getting high-rarity pickaxes.

In the New World, mining is a trade skill for gathering. Players can use this skill to collect materials for crafting and refining from the scattered Alchemy Stones, Ore Veins, and Stone Nodes around Aeternum. Although Saltpeter doesn't require any high level of mining, it would ensure you have the best skills and tools to mine.

Players will be able to get higher-tier materials from various kinds of ores and nodes by leveling up this talent. These can then be utilized to create other types of equipment, including armor and weaponry. Mine any ore you come across, and keep an eye out for spawns at all times. You will eventually become used to the area's fixed spawning.

You already need the ores you're mining to update your mining equipment. Your mining equipment gets better as you gain experience and have better ore quality. Better tools' durability lessens the grind of the entire operation. You can put efficiency over speed when it comes to quickly leveling your mining skill so that you can access most of the game's content.

You can purchase some New World Coins using real-life money to level up faster and purchase resources like armor, weapons, and other stuff.

To aid you, visit our website MMOPixel to purchase New World Gold Coins. We provide the best service on web.

While mining for saltpeter ore, keep in mind the following locations, as these have an abundance of the ore. This would save you time and hence help you level up faster. Saltpeter can be found at a number of places in First Light, albeit most of them are dispersed over the area.

Due to the low-level adversaries and proximity to the village, we advise farming Saltpeters on the region's southeasterly edge.

In the south and southeast of Windsward, saltpeters can be discovered. The majority of these are situated in hostile regions and steep terrain.

Saltpeter may only be gathered in one place in Everfall. Therefore, we advise going to Monarch's Bluff or Windsward if you need to buy saltpeters in large quantities.

The population of the area, as well as its Spirit Shrines, are both easily accessible sources of Saltpeter. Therefore, you should begin at the southern Spirit Shrine and go up to the resource before heading back to the settlement.

Brightwood's Saltpeter will be located primarily in the center of an enemy zone. However, when it comes to the foes you want to confront when farming Saltpeter, you can choose. You'll face Angry Earth in the southwest, powerful bears in the northwest, and Lost foes in the northeast.

In Ebonscale Reach, there will be a lot of Saltpeter spawns. Going after the outliers around the local beaches won't be worthwhile, though. Instead, because the Saltpeter spawns in Thunderking Grotto are congregated, this would be the most effective area to farm there. The level 54, lightning-resistant Beasts should only be avoided.

Unnamed caves to the north of the area contain all of the Saltpeter in Great Cleave. Ice wolf elementals typically guard these nodes, so use caution when farming them. Even high-level 40s will find it challenging to defeat them because they are all level 50.

On the opposing flanks of Svikin's Stand, there are two caves. In a sort of no-space, man's just below the hillside that makes up Dead Fool's Pass is the second cave to the west.

Near the population in the area, there is a lot of Saltpeter under the North Vega Bridge and the South Vega Bridge. The Ancient opponents in these regions range in level from 32 to 34, despite the fact that they are on the bridge itself.

Southeast of the hamlet is Hazel's Cave, which offers a different location. Before harvesting the resource node, you might need to kill or dodge Level 32 Lost creatures that are present in this location.

There are some other locations too where a player can find Saltpeter; these include: Another option to get Saltpeter is through the trading stall (also known as the P2P market); however, not many players do so due to the rarity of the material needed to make ammunition. So you still have the choice, but the costs will be significant.

In the New World, gunpowder, a necessary ingredient in the creation of musket cartridges, is made from Saltpeter. This might be an immensely crucial resource for you, depending on your chosen character and the weaponry you prefer. By doing this, you will have already acquired the gunpowder you need to keep shooting at all the reckless players you run into while playing this MMORPG.