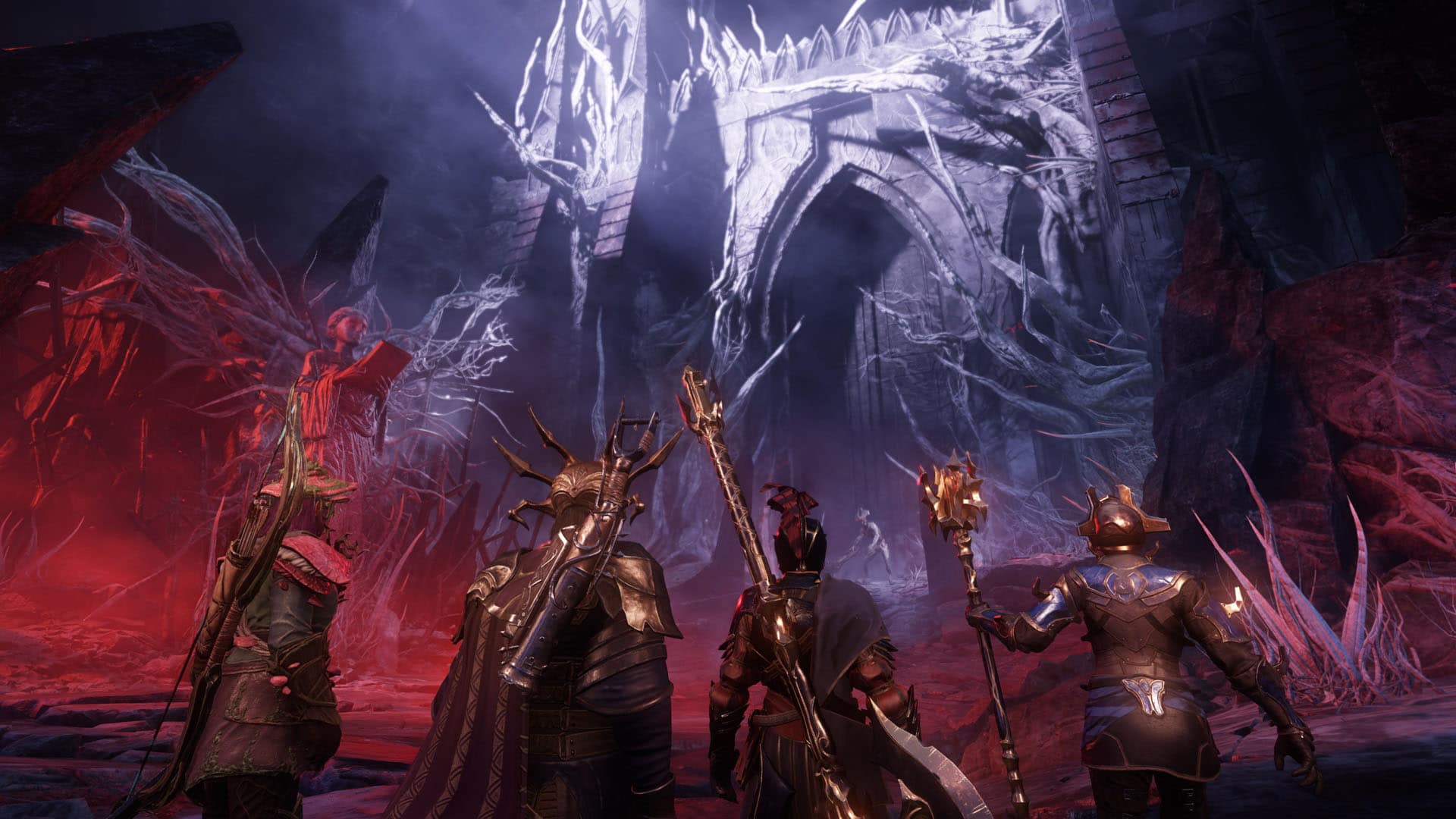 New World 1.6.7 The Heart of the Tempest Quest Guide

The main objective of New World is to search a barren, cursed island for the valuable substance known as Azoth. You join one of three groups that fight for dominance over the island's many areas and settlements while attempting to fend off the enigmatic and evil corruption that appears to be sweeping the island and transforming its human inhabitants into mindless animals.

Aeternum is a magical island that serves as the setting for Amazon's New World MMO and is home to an evil power. Players must contend with the island's hazardous and corrupted wildlife and the undead remnants of earlier voyages that have lain in wait for generations as the most recent wave of explorers.

The October 4, 2022 downtime for New World Update 1.6.7 started at 11:00 PM PT (6:00 AM UTC) and included several fixes. First, we got patches for a rare server problem when the AI navigation system wobbles, as indicated in the official New World Update 1.6.7 patch notes. This issue has also been fixed, along with fixing region transfers for players that reached their character limitations and improving in-game punishment messages for a little more context and clarity.

'The Tempest's Heart Expedition Dungeon Legendary Items Good Perks were added by the New World Heart Of Madness Content Patch for Amazon's MMORPG. As you explore Isabella into the storm's center, players will eventually face Isabella, one of the story's primary antagonists! This expedition included a lot of breathtaking landscapes and was pretty tricky.

Many of the bosses in this dungeon had complex mechanics and frequently dropped numerous good-named items with valuable bonuses. The latter two bosses gave you a run for your money and gold during the lengthy experience. As the story develops, you can gain Gypsum, equipment, gold, and more. A unique cut scene at the conclusion explains Isabella's destiny, and there is still a lot of content and a new area to explore. The expedition 'Tempest's Heart' requires level 66 to begin. The maximum gear score for The Tempest's Heart loot drops is 600. These goods do, however, adhere to the New World Expertise System. Therefore, unless you have already pushed your expertise up to that cap before earning the drop, the prize will not drop at gear score 600. However, the expedition bosses from this excursion will enhance your expertise. Therefore, you could get Expertise bumps from the chests inside the dungeon.

Each player gets 15 normal expedition runs daily, or 105 per week, and there are 25 Mutated Expeditions per week. Before beginning the quest, if you require any resource, weapon, or gear, consider purchasing some New World Coins using real money quickly.

Visit our website MMOPixel to purchase New World Gold Coins. We provide the best service on the web.

Key Points to Remember before beginning

After entering the Tempest's Heart dungeon, proceed along the first corridor, clearing off trash creatures until you reach the steps leading up to the Gates of Madness. You will come across Isabella once you reach the Gates of Madness area. In the center of the room, she will turn on the corrupted monolith. You must use your Azoth staff to seal the three tainted pylons surrounding the monolith. The carapace must then be attacked in the center of the corruption for it to be broken. You will seal it with your Azoth staff after it is broken to finish the room.

Once you pass through the gates, you will face Ekheke, a level 66 Spriggan Elite, in your first boss battle (1st Boss Fight). Around the boss, there are several garbage mobs. Clear those before concentrating on the boss. This boss doesn't have any tricky mechanics. Simply keep the boss under DPS. You must locate the cellar key after defeating the boss. Following the trash mobs, you will ascend the stairs to the right. You will enter the red portal as soon as you reach the top steps. After passing through the portal, you will run into High Maiden Lai, a level 66 Elite boss. You must first kill the rubbish mobs surrounding her before you can kill her.

Return to the cellar door and open it using the key you just stole to enter the room. In the room, you will encounter Vroeg, a level 66 Elite Brute. After killing the beast, speak with the heretic in the cellar.

You must navigate through garbage mobs in the corrupted graveyard after leaving the crypt to get to another Elite Mob. Level 66 ruthless Eduardo. Simply eliminate the Elite, proceed past the Corrupted Graveyard's other rubbish creatures, and then enter the Basilica through the double doors. Once inside the Basilica, descend from the ledges to the floor where Isabella, your second boss battle, awaits you. The boss battle is not too difficult to defeat and doesn't require many mechanics. To proceed with the dungeon, you only need to reduce her health to about 75%. She will teleport out after she reaches 75% health, which you can continue.

Before the Isabella fight, clear the garbage mobs from the hallway and gather the respawn point. Wait until everyone is on the platform before engaging. Once the battle starts, you'll see two more cultists join Isabella. Isabella will enter the battle with two empowerment stacks on her person.

Throughout the battle, she will generate one stack of cultists at a time. To prevent Isabella from receiving additional empower stacks, be careful to DPS the cultists. Similar to the previous encounter, you do not have to kill her even though she uses the same attacks. She will teleport out once her health is down to half, allowing you to carry on with the adventure.

Jump from the ledges and descend along the route. A Void Destroyer and several garbage mobs will greet you here. A player will be targeted by the void destroyer, who will then use a persistent laser to cause significant damage to that player. If you remain behind the wreckage of the destroyed spacecraft, you can line off-site the initial lasers and eliminate the trash mobs. Someone in the group will need to climb onto the repeater after the trash mobs have been defeated and target and kill the Void Destroyers' Eyes.

Before continuing up the steps to the right and entering the City of Darkness, make sure you loot the nearby chest. Once you reach a room with 5 summoners and a sizable bubble covering the statue in the middle of the room, you must defeat the trash mobs and an Elite level 66 mob named High Priest Basir along the journey through the city. Once finished, proceed to the following region by passing through the void tunnel. Headman Pang, a level 66 Elite, must be defeated here. Once cleared, enter the following area, Bloodstain, using the opposite void tunnel.

The fourth boss of the dungeon can be found here. Neishatun is an extremely mechanic-heavy boss, and you'll need to be familiar with them to kill him. The fire all around the arena is the central mechanic to be cautious of with this boss. During this time, the boss will vanish, and glyphs will start to appear on the arena floor. These symbols show the location where a sizable circle of fire will appear. Before the fire explodes, you must get to the arena's safe (fire-free) portion.

The glyph appearing above players' heads is another cautionary mechanic. Neishatun will either target you with an array of arrows or send a shockwave your way if this glyph appears above your head, dealing enormous damage to you both. The wave can be avoided but causes a tonne of damage.

Additionally, an orb will occasionally spawn. Everyone should immediately target the orb when it spawns and DPS it as quickly as possible. If it is not eliminated in time, it will erupt and apply a stack of fire to the entire team.

The glyphs will spawn once the boss has approximately 75% health remaining. Be aware of where glyphs are and are not when they spawn on the map. To dodge the fire and the application of burn stacks, move to a part of the map where you did not notice any glyphs. The battle continues, rinsed and repeated. After you've defeated the boss, make sure you take anything you can from the chest close to the void tunnel before going through it to Father Russo and speaking with him. You will reach the last boss battle after speaking with him. Compared to the previous fight, this one is not quite as mechanically complex. There are a few mechanics to be mindful of, though:

Near the rear of the arena, there are puddles of corrupted blood on the ground. Avoid standing in these. When you stand in them, they do a lot of harm.

Keep aggro on your tank while keeping track of the abovementioned mechanics. She will perform a lot of melee ranged attacks and AoEs that your tank will need to dodge. Due to the numerous close-range AoEs surrounding the monster, this fight is not very melee friendly. Once the battle is over and you can leave the dungeon, plunder the expedition chest.