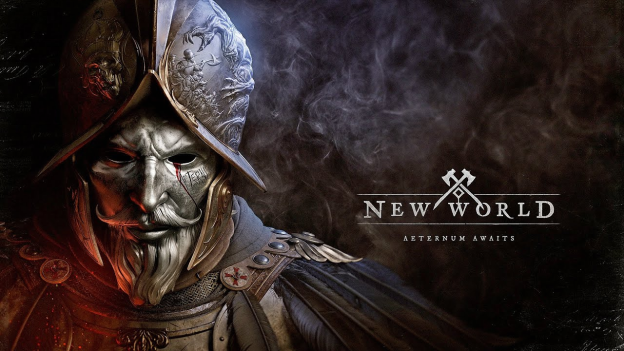 While New World feels accessible during the tutorial part, stepping into Aeternum island for the first time is overwhelming. How to scavenge, gather, craft, fight and so much more? The game won't hand-hold you throughout your playthrough.

Some mechanics won’t be explained to you right away, so we’ve gathered a few beginner tips to get you started. 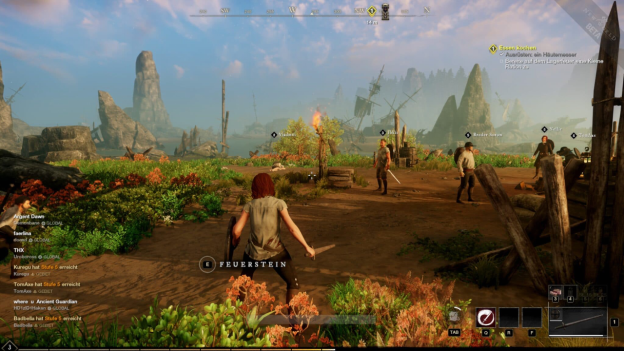 After completing the tutorial, the game spawns you into one of its four starting locations. Unfortunately, you can’t choose or change your starting zone. You’ll be obligated to stay wherever the game leads you.

The whole world of Aeternum is divided into 14 different zones, but new players are going to spawn into four of them:

These zones are fairly equal in terms of features, as they function as starting areas for new players. Here you’ll learn the basics of combat, gathering, and crafting. Also, take your time and learn how to fish or set up a camp.

Don’t skip the starting quests, as they give you plenty of experience, money, and a Skinning Knife.  After completing them, it's best to stick around and search for valuable early-game materials.

For example, Turkeys are the main source of feathers, poultry, and eggs, making them quite important. That’s what you need the Skinning Knife for. Poultry and eggs are used in cooking recipes, whilst feathers can be used to craft arrows. 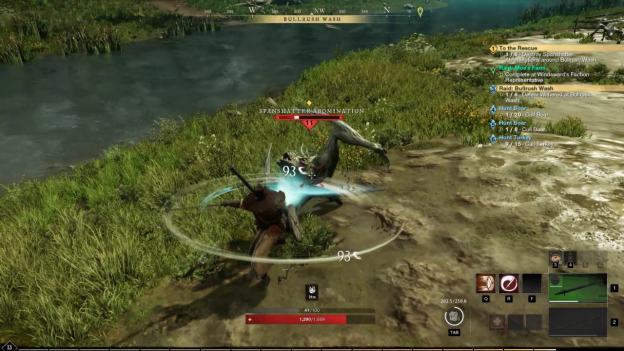 Unlike other MMO’s, New World doesn’t offer a class system to choose from. Instead, you need to use the weapon type of your choice to master its capabilities.

It’s similar to Skyrim, where you unlock skills and perks using weapons you like and tailor your build around your chosen playstyle. In New World, it’s called Weapon Mastery.

Every weapon type has its own strengths, weaknesses, and focuses on different attributes. That’s why I advise you to try each and every one of them to see, which one you like the most. This way, you can focus on the right attributes early and unlock weapon perks faster.

It’s also essential to make use of both weapon slots. For example, combining a sword with a bow or using Fire Staff alongside a Hatchet. Creating a build that maintains a balance between the two is a lot of fun.

Focus on Crafting and Gathering Early 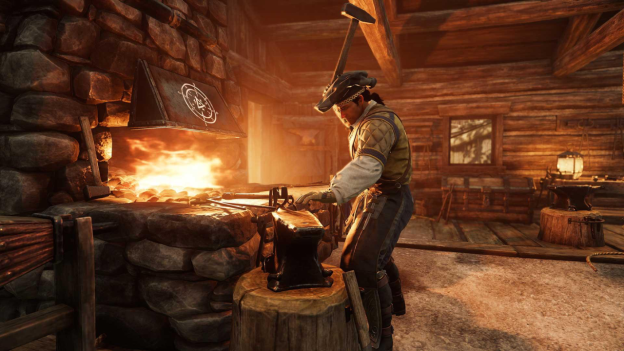 Without crafting you won’t be able to progress so it’s best to get a hang of it as early as possible. However, crafting is most beneficial at the max level when you can farm better resources to create the most powerful gear.

Crafting early has its own benefits too. It can be a great source of income and better weapons. It means you don’t have to rely on loot drops and quest rewards as much. If you plan on using ranged weapons, crafting arrows and bullets is necessary.

You can also visit the Trading Post to sell items you made and obsolete stuff. Check what sells well, and craft purely to make gold. This way, you can level up Trade Skills from the start of the game to get better prices, thus making more profit.

Equip your character with the best equipment to conquer all the zones by buying New World Gold Coins. 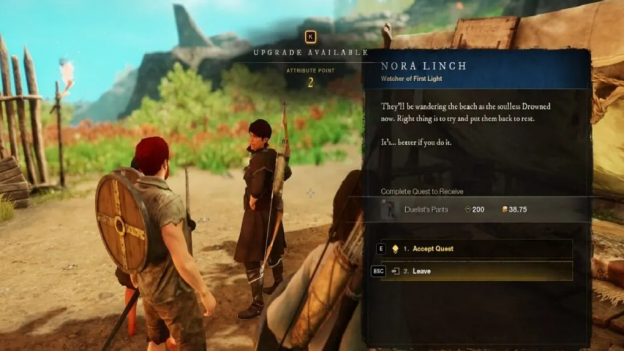 Completing the main story quests is mandatory, but others can be easily overlooked. Side quests are a good source of income, new gear, and experience. It’s also a great way to escape grinding and make the experience less repetitive.

After reaching your first Settlement, head over to the Town Board and check Town Missions. These tasks can vary from killing a certain amount of creatures, to bringing a specific material to NPC.

By completing quests, you can unlock different crafting stations and further advance the Settlement. These are a part of large-scale activities, that players can work together on called Town Projects.

Completing the Faction Quests won’t give a huge amount of XP, but they’ll reward players with Faction Tokens. Those tokens are used to buy Faction-specific gear and weapons.

The only difference between the gear of each Faction is purely cosmetic. In terms of level and power, each shop has the same to offer.

Choose from a plethora of PvE or PvP quests and redeem Faction Tokens for better rewards.

Use Azoth For Fast Travel and Crafting 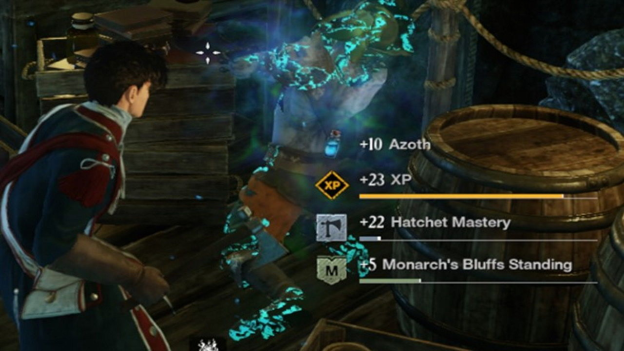 Azoth is a very important resource that you’ll use to fast travel and improve crafting. Considering the scale of New World’s map, fast travel is essential to teleport between Settlements.

To fast travel, open the map and zoom out until you see the Settlement icon. Click it and select “Fast Travel” on the right-hand side. The Azoth cost depends on the distance between Settlements and the overall weight of your equipment. You have to visit the destination Settlement at least once before fast traveling there. 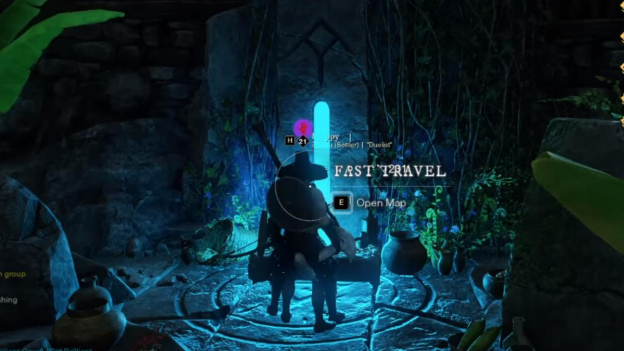 When crafting, you can add a certain amount of Azoth to your item for different benefits. It can give you an attribute, perk, or gem slot on the item you’re working on. Gem slots are very useful when you’re after the best gear for your desired build.

As you can see, you’re going to use Azoth a lot throughout your playthrough. It’s beneficial for every playstyle. There are a few ways to acquire Azoth:

Regardless of the chosen farming method, you’ll still be able to gather a healthy stockpile of Azoth. 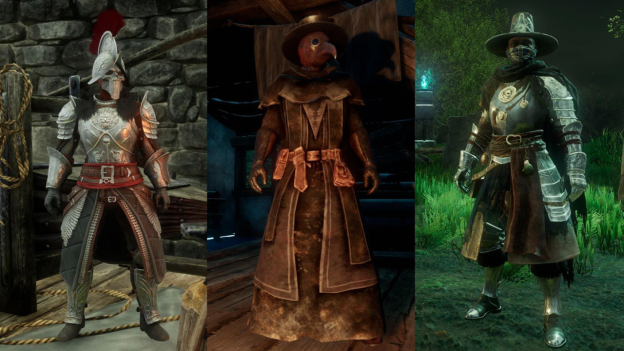 Once you reach a certain part of the main questline, you’ll be given a choice to join one of the three Factions. Each Faction has its own lore and is in control of several different areas known as Territories.

Factions of New World are presented as follows:

●        The Covenant. A religious-themed faction, that has charged itself with cleansing the land of heretics and defilers so that its true holy nature can flourish and justice can be restored.

●        Marauders. A militaristic faction keen on establishing a free nation, where anyone with the strength to do so can prosper and profit.

●        Syndicate. A secretive faction of boundless guile and intellect in search of forbidden knowledge to usher in a new age of enlightenment.

You can choose only one particular Faction, so you’ll need to decide carefully. Switching to a different one is possible, but only when 120 days have passed since joining the last one, so don’t rush your decision.

Aside from aesthetics, you should take into consideration a couple of factors. Each Faction’s Territory varies between servers. Eventually, they will battle over those Territories so it’s worth joining the most dominant Faction on your server.

Companies are also faction-exclusive, so it’s best to communicate with your friends which one you’d all like to join. Joining the same Faction ensures you won’t fight against each other in PvP battles.

Learn About Territories and Settlements 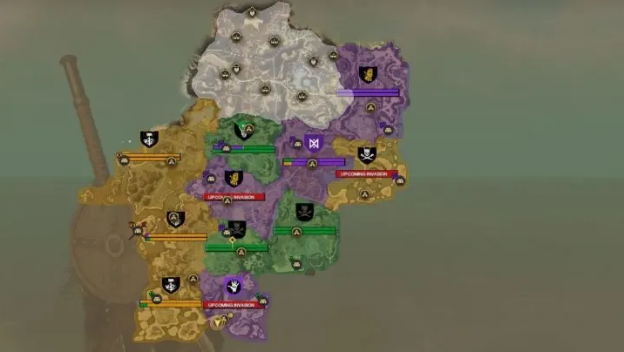 Territories govern the state of the world. The owner of one can determine its taxes and prosper. Each territory has its own prices for fast travel, using workstations, defending against Corruption, etc.

Each Faction and its members are playing tug of war for Influence. Influence is achieved upon completing PvP missions. The current owners of the Territory do them to maintain their power while opposing Factions are trying to set their own Influence upon the region.

Once invading Faction gathered enough influence, they can go forth and declare war. If they win, they’re taking over the Territory and the Settlement for the entire Faction. Upon the new jurisdiction, they can set their own taxes while defending against other invaders.

Manage Your Equipment and Inventory Weight 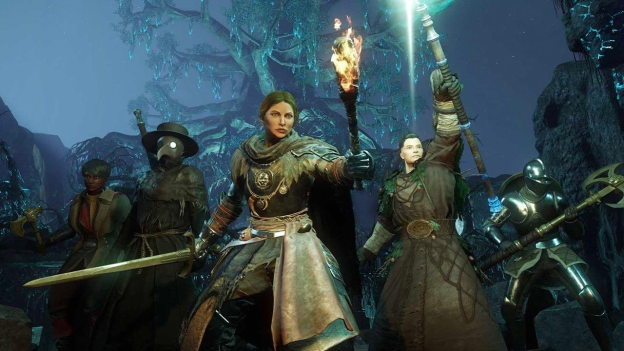 Like every other RPG, New World places a weight limit on your character. Of course, you can increase that limit to carry more, but it's essential to sell unnecessary items or store them in the Storage Shed. Storage Sheds are personal storages that can be found in every Settlement.

Weight limits also apply to the stuff you’re wearing. Based on the total weight of your equipped armor, the game defines it as Light, Medium, or Heavy. It’s called equip load. It’s a great way to gain buffs in combat but it also comes with its own drawbacks. Pay attention to the class of armor you’re wearing.

These leveling tips should be more than enough to take full advantage of New World’s mechanics. While its learning curve is more difficult than other games, it's also very rewarding.

Don’t underestimate the value of raw materials and always have two weapons in a build: a primary and a secondary. Use them for a significant damage boost. Also, don’t forget to explore so you can unlock more fast travel options. Utilize these tips so you won’t fight other Factions unprepared!

For additional tips regarding New World, check other guides on MMOPIXEL. We offer a lot of articles focusing on MMO games compared to other sites. Whether you’re a beginner or veteran, here you’ll find everything you need.

Furnishing in New World is not only for aesthetics. Find out its main benefits and how to level it up with MMOPIXEL New World Furnishing Leveling Guide!

Arcana skill is one of the most important trade skills in the game. This New World Arcana leveling guide will teach how to level up fast.

Cooking in NW is a reliable and rewarding profession. Check our New World Cooking Leveling Guide guide and find out how to level it effectively with MMOPIXEL!

Develop your crafting-related skills in New World. Take your gameplay to another level with MMOPIXEL!