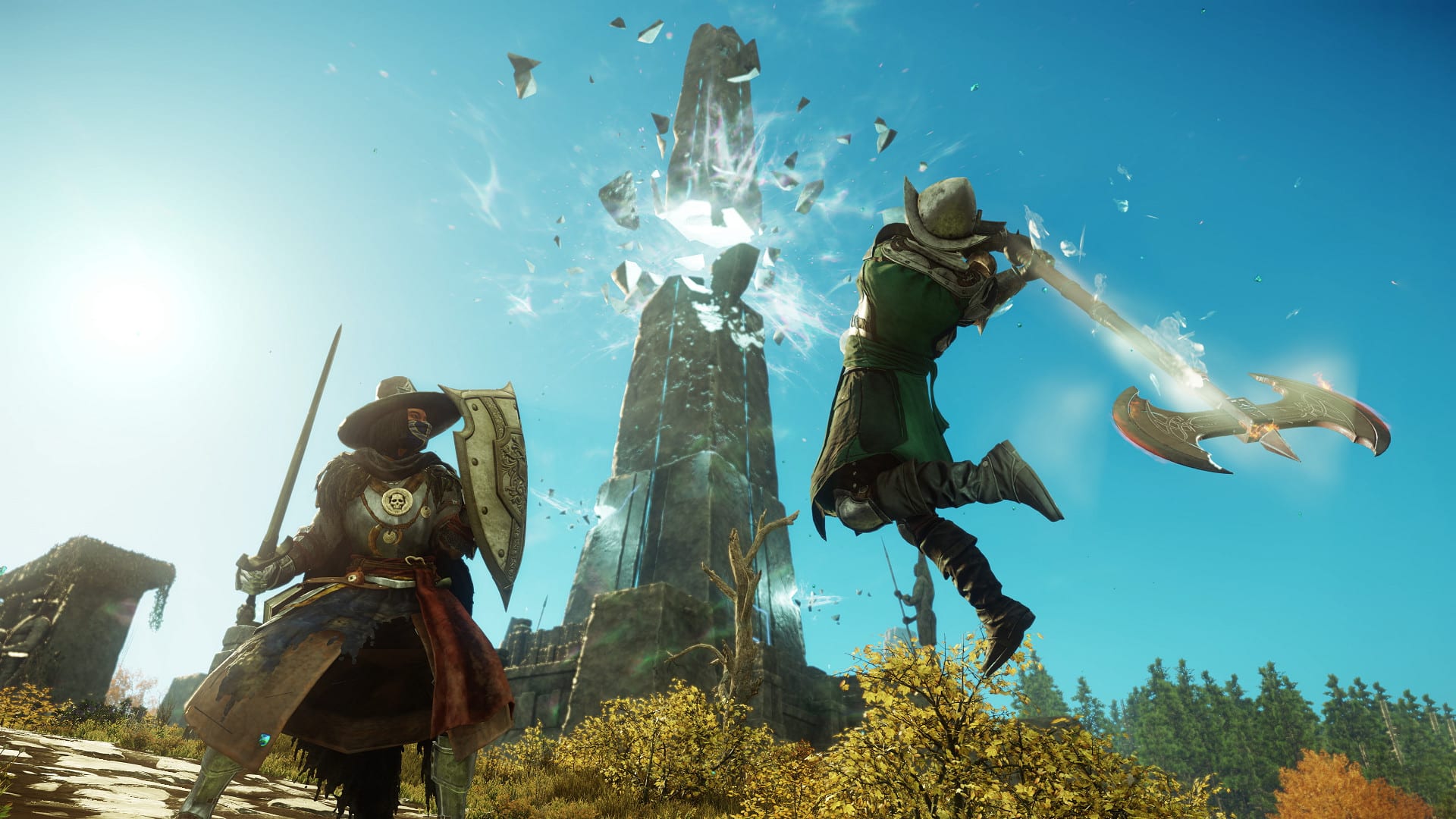 The finale for Amazon's MMO will be available to you once you achieve level 60 in New World. At this time, getting the best equipment with the greatest Gear Score is the only goal left in the grind. You must comprehend how the High Watermark system in the game functions, particularly how it impacts your overall Gear Score, to accomplish this. We'll explain everything you require in this guide, such as how to increase your Watermark.

The gear rating of the drops you get from endgame content, such as elite zones, Invasions, Wars, Expeditions, and Outpost Rush, are determined by a mechanism called the High Water Mark System (also known as HWM). Once your player achieves level 60, the system goes into effect and is particular to every equipment slot and weapon. For instance, an Ice Gauntlet and Fire Staff would have two separate HWMs, as would an item with a Head slot and one with an amulet slot.

Currently, each slot has a maximum HWM of 590 Gear Score (GS), though this number is anticipated to rise over time. There is a floor and ceiling for each HWM level; the floor represents the lowest GS you can anticipate from things, and the cap is the highest GS you can obtain above it. For example, the bottom and cap would both be 10 GS at 590 HWM so that you can find goods with GS values ranging from 580 to 600. When you're under level 60, accumulating experience is crucial for improvement; however, once you hit the cap, you'll start to depend on your gear rating to increase your overall power. The Watermark system is helpful in this situation. In essence, each object that falls for you within the game world has a potential Gear Score that depends on your Watermark.

Since there is a different Watermark for each gear, your Watermark will differ for items like chest armor, gauntlets, helmets, and more. The same is true for other weapons, such as hatchets, swords, spears, etc. Your main objective as a level 60 player is to raise that Watermark since doing so will enable you to purchase better things, which will raise your Gear Score.

The maximum Watermark one can currently obtain is 590; however, we anticipate this may alter in upcoming versions. When you reach level 60, your things will start with a High Watermark rating of 500. The only weapons and armor you can find have a Gear Score of 500. The likelihood of discovering an item with a rating at least five points greater than your present High Watermark is extremely slim. So, for instance, you might discover a part of chest armor with a rating of 505 overall. Your highest Watermark would then rise to 505, enabling you to discover new goods with a score of up to 510. The impact of the high water mark on New World Endgame

This becomes crucial in the New World endgame as, when you attain level 60, the standard gear score for every slot is set to 500. Therefore, the only option is to increase the High Water Mark to obtain better equipment.

Practically speaking, the answer is straightforward: equip a new gear item if you locate one with a better gear score. Even if you don't continue to keep the item mounted after doing so, it will raise the Watermark. From that point on, you may come across loot with a score that is marginally above or below the new standard. Equip a component with a higher score after you find it, then keep looking for others to raise the Watermark.

Importantly, after level 60, this technique does not work with items acquired through shops or craftsmen, traded items, or awards from quests. Dungeons, arenas, monsters, or bosses must all drop them or be located there.

Arming the right gear, you can find, will gradually increase your gear rating watermark. It is important not to raise it solely by adhering to your preferred things. Loot will never increase beyond the high point of the gear slot, especially in the endgame. Also, remember that each slot is affected differently by the ghost gear score. It will take a long time to raise them all.

You may be able to unlock several new things after a new update, but you'll need to have a good amount of gold coins to progress through the game and beat the bosses. As a result, save some gold for armor and weaponry.

If you need some gold coins, visit our website MMOPixel to purchase New World Gold Coins. We provide the best service and cheapest rate on the web.

The best way to raise your High Water Mark Score

There are various ways in New World to raise your HWM rating:

The final point deserves special attention. Using luck-based equipment affects the rarity of items you obtain but does not affect your  Gear Score. As a result, providing you with more total drops indirectly aids in raising your Gear Score. Nevertheless, because it is impossible to target-farm a certain item type, your options are limited to grinding as many enemies and chests as possible.

Your HWM will begin at 500 GS and gradually rise to higher watermarks in increments of 3, first in steps 5 and finally in steps of 5. Each time one of the events, as mentioned earlier, is triggered, your HWM has a very slim possibility of increasing, and the greater your Watermark, the lower your chances are of doing so. You don't need to equip or loot the goods; you need them to drop for your score to go up.

If an enemy mob is above a particular level, you won't be able to boost your HWM further. You cannot, for instance, raise your HWM to 590 using only level 61 creatures. You must instead complete level 66+ areas and mobs at bigger HWMs.

Kill level 65+ elite monsters in places like Upper Harrow in Myrkgard to raise your HWM to 590 GS. Additionally, compared to typical elite mobs, elite-named mobs have a considerably more prominent probability of dropping an object that can increase your HWM.

Your HWM might rise as high as 590 thanks to expeditions and arenas. In Lazarus Instrumentality, Garden of Genesis, the Siren Queen, and the Spriggan Arenas, many expedition bosses and mobs have greater possibilities of dropping things that can raise your HWM. Additionally, things in those dungeons may roll up to 600 GS. The greatest difficulty in using this strategy to boost your HWM is that Boss Arenas and Expeditions are locked behind Tuning Orbs, which are difficult to farm in comparison to specific other open-world strategies like looting elite mob farming or Elite Supply Chests.

Looting Elite Supply Chests in elite areas like Ambusti Mines and Myrkgard in Shattered Mountain and Forecastle Drift in Reekwater is another option to raise your HWM score.

Elite Supply Chests must be harvested daily because of their 24-hour cooldown. Bring some buddies; however, having too many (over three groups) will negatively affect the loot you acquire from mobs. These regions demand a group, so be sure to do so.

Another effective way to raise your HWM in Shattered Mountain is through corrupted breaches. These can be completed by bigger teams so that a company can work on them together. The caches you obtain from completing Corrupted Breaches are classified as level 66+ mob drops, meaning they can raise your HWM to 590 GS and drop things worth 600 GS.

Although they typically last 15 to 20 minutes, Outpost Rush battles can go up to 40 minutes. You will receive a cache; you'll be able to plunder for 3 endgame items, whether you win or lose the match. These items all have the potential to raise your HWM for that specific item. Finally, when working on your Watermark, you can wear the items with the highest gear score. The latest Watermark is considered and assigned to the relevant item slot whenever a mob or chest drops an item. It is a complex system to understand at first, but for the time being, it is what we have to deal with. Remember that each slot has a unique Gear Score, so if you're looking for a specific item type, you can keep searching chests and elites until you locate it. Unless you have exceptional luck, a few of your equipment slots will be substantially lower than others.