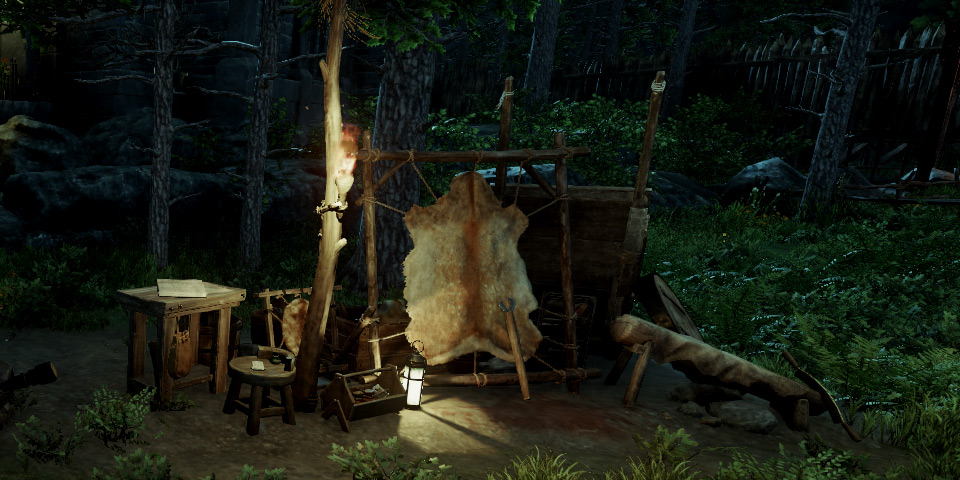 The amazing MMORPG New World, which has amassed hundreds of thousands of players since its release, has managed to win over the hearts of the majority of gamers. The game provides players with a variety of careers and advancements.

These abilities can be refined either in-game or through separate practice. The game has three primary vocations: crafting, refining, and gathering. These are referred to as trading skills. Today's topic will be the Leatherworking profession, a subset of the refining skill. The process of refining unprocessed animal hides obtained through the Gathering talent of Skinning is known as Leatherworking. And leather is made using it. Like any other video game, New World features a variety of interconnected talents. For instance, you might gather the skins using Skinning, make them with Leatherworking, and then sell or craft with the finished item.

The products can be made with the tanneries' New World Leatherworking Skill. As you may already be aware, these stations have several Tiers. They are reachable by Settlements. You should focus on the Town Projects if you're eager to build the tanneries in your settlement. If not, browse the map to locate the tanneries of the necessary tier in the other Settlements. You must consider the following before starting the leatherworking process.

Getting a Skinning knife

One of the essential tools in the New World is the skinning knife because it is required to acquire the necessary materials for numerous occupations. Even the development of Settlements depends on it.

Tools have several tiers, the same as weapons. The better tools you can equip increase with level. The Skinning knife has five stages, each with progressively better bonuses:

Skinning knives are available from the following sources:

Just Tier 1 tools can be produced in your camp, so keep that in mind. The crafting station requires engineering and is the best place to find improved knives. You could also purchase some in-game currency to get yourself a high-tier axe.

To aid you, you can visit MMOPixel and purchase New World Coins.

There are five kinds of leather in the game, each with different Tier levels. The level of the item you want to make corresponds to the Tier level of the Tannery facility that you need. In other words, a crucial element in your development is the Tannery center's level. You might need to locate another if yours doesn't.

The Process of Skinning to Leatherworking

Let's now look at how to obtain these leathers. You should also pursue the profession of Skinning if you wish to advance in Leatherworking and create brand-new leathers. You can track animals in the wild while working as a skinner, as the profession's name suggests. Animal hides, which are needed for recipes in Crafting and Refining, can also be obtained using this Gathering skill.

Furthermore, it provides drops based on the level of the animal after killing wild animals like boars, elks, and wolves. Players with higher levels of Skinning also acquire an acute sense of tracking, which helps locate such creatures in the wild. So you can pursue rarer and more advanced animals.

In addition, Skinning is a skill utilized in Leatherworking and armoring. The Skinning Knife is used for this procedure. In addition, as the level of this weapon increases, so does your gathering speed.

Additionally, you will gain perks unique to your Skinning skill if you choose a Dexterity build. For every 50 points you provide the stat, this feature improves.

In addition, depending on the skin you want, the level of the animals you must kill is significant. You have gained a lot of priceless leather and raised your level in Leatherworking. The leathers you obtain in the Leatherworking profession can be used for Crafting in the more complex game levels, such as Armoring and Weaponsmithing. Both of these will improve your character and bring in money as gold. In addition, there are recipes for the Arcana and Engineering professions that call for leather. In other words, we advise you to spend extra time developing each profession because they are all connected in the game.

Some buffs to use while skinning

The charm of Starmetal Skinner

Consider it a gem that is affixed to your Skinning Knife. When wearing, you have a 9.3% higher chance of dropping rare items while skinning.

Your chances of successfully skinning as an active buff will rise if you display these awards someplace in your house.

It has levels as well:

You will also temporarily enhance your probability of peeling when you eat certain meals.

As we previously established, you gain more Skinning benefits when you invest attribute points in Dexterity. The number of buffs and their features increase as you advance. In other words, performing Skinning for a Dexterity player is better.

What we have written is considered part of the New World's leatherworking profession. However, dozens of themes are still relevant to other vocations and call for in-depth crafting knowledge. You can fully understand the professional system in New World by adhering to the specifics and tips in our other articles. In addition, you can keep following us if you want to learn more about the game's endgame, which includes the builds to be constructed beyond level 60 and the upcoming job upgrades.