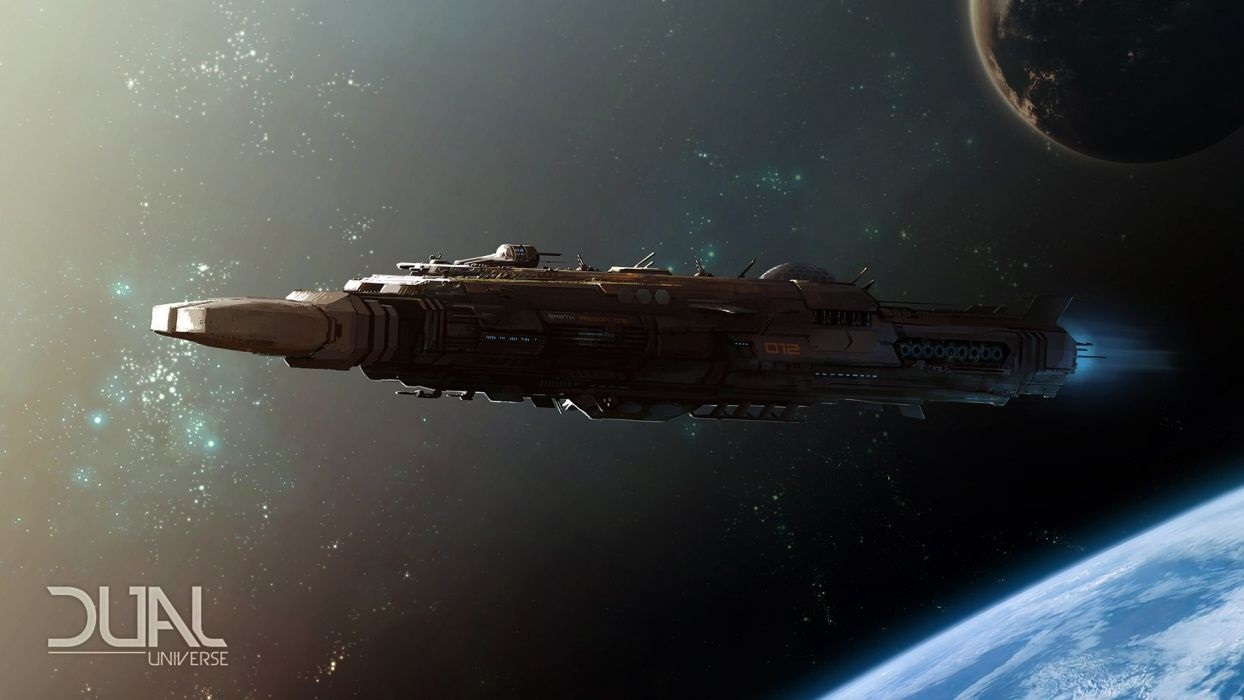 A Paris-based game development company called Novaquark is working on a first-person space simulation sandbox massively multiplayer online role-playing game called Dual Universe. It combines Space Engineers, Eve Online, and No Man's Sky elements. The game is set in a single-shard universe where players can freely alter the surroundings by constructing buildings, changing the geography, and programming the internal workings of vehicles and other player-built objects. It is also stressed to enable cooperative social gameplay that includes politics, fighting, mining, crafting, and trading. When we say "totally player-driven," we mean it. Dual Universe is a completely player-driven and decentralized economic system. Every item you purchase from the market and every Quanta you earn from selling it are players' products. These players are the sole and primary force behind Dual Universe's economy growth. There are no pre-built ships, vehicles, or structures in Dual Universe; all in-game items must be constructed entirely by individuals. Except for geographical characteristics, almost everything you see was entirely built by the player. This drives players to build supply chains because doing all of the mining, refining, and crafting oneself would cost a lot of money. Instead, selling raw resources and purchasing previously refined ones is frequently preferable. Before you begin interacting with the economy, keep this in mind.

The simplest way to get money in Dual Universe is to mine and/or acquire resources, primarily ores, and then sell those things on the market. Here are some suggestions that can be useful to you if you want to make money pretty rapidly.

Apart from the tips and steps are given below, you can simply purchase the in-game money using real-life money.

Visit our websit MMOPixel to purchase Dual Universe Quanta. We provide the cheapest rate on web.

Everything begins with the mining industry. It is necessary for the existence of resources, materials, alloys, elements, units, structures, and the economy. Without access to a significant industrial supply base, it is also one of the most lucrative in-game activities players can engage in. Therefore, mastering effective mining techniques is crucial. The key elements of mining that will help you begin your digging activities are outlined here.

You can adjust the diameter in which your Mining Tool will extract resources by holding down the Control key and rotating the mouse wheel while the Mining Tool is selected. For example, by increasing the diameter, you may dig deeper holes and harvest resources from a bigger area.

You'll eventually want to industrialize your mining activities. One of your first investments should be in a Territory Scanner, which enables you to search vast territory for natural resource resources.

Your Mining Tool will automatically mine if you click and hold the middle mouse button, which is a little quicker than clicking each time.

It's time to establish your Industry to support your future advancements after learning how to mine.

Before you launch your own Dual Universe business, you must first understand the following: It is much more effective to sell raw ore and use the proceeds to build your enterprise by purchasing ready Industrial Units than to try to be self-sufficient and make everything from scratch. This occurs for a very straightforward reason, namely because skilled and experienced players can mine, refine, and create much more effectively than a rookie player can, requiring significantly fewer resources to produce the same number of goods as you do. So have that in mind. Additionally, constructing takes a lot of time, especially early on in the game; thus, buying pre-made Units will allow you to advance much more quickly.

After choosing the location for your Industry's foundation, you ought to set up a Static Core. Then, you can see how far you can construct from the Core in the area surrounding it (depicted by the blue square grid). Following are the Industrial Units you will require:

Fuel is manufactured via a different chain than other materials. So what you'll need to make it is:

A recycler can reuse scrap for repairs and recycle pure hydrogen and pure oxygen. As a starting resource, it accepts many kinds of processed materials.

The first thing to remember when building a ship is the obvious truth that the bigger the ship, the more resources it will require. The size of the ship tends to cause building costs to increase tremendously. The main causes of this are as follows:

Your first spacecraft should be as compact and ergonomic as possible.

One of the best ways to make money in Dual Universe is by selling spacecraft. Small ships can be built for relatively little money, especially if you choose a simple design. However, components like the following are essential: Missions are the most effective way to earn active money. Look at the missions tab and try out flying. To get a feel for them, start with safe zone missions. You should specifically learn pipe avoidance before taking part in PvP zone missions because your odds of survival if you simply jump from one planet to another are limited.

Boost up your Talents

They improve or speed up practically every action you take while playing the game. The best course of action is to invest in the proper Skills if you want your character to get better at something. By hitting F2 on your keyboard, you can display the Talent Window for your character. You can instantly unlock Talents through this window with Talent Points or gradually using the Learning Queue. Typically, mining and inventory talents are ideal places to start. Early development will assure speedy progress because you can mine resources more quickly and store them in larger quantities.

Apart from the points above, you must also keep in mind the following to extract big amounts of money as quickly and efficiently as possible.

Dual Universe can be pretty overwhelming to anyone new to the game, and the size of the game is pretty huge. So here is a building guide to make your initial game hours a bit smoother and more productive.

Mining is known as removing resources from a planetary body, such as a planet, moon, or asteroid. In the Dual Universe, mining is the primary method of resource acquisition.

The idea of Dual Universe in MMOs is incredibly intriguing. There is a single, huge world where all users congregate and play in one common sandbox rather than several servers. It's a Voxel MMO, similar to Trove, but unlike that game, you can construct anything, from a house to a space station.

NBA 2K23 is indeed a massive game that is meant to be played daily and has a tonne of new material to keep you occupied until the release of the following year's version.