Have you heard about the brand-new dungeons introduced in Harrowstorm DLC? If not, then worry not, as we will introduce them and discuss Harrowstorm Gear Sets in this guide article. Elder Scrolls Online allows players to collect a slew of the latest gear in the two newly added dungeons, thanks to the release of the Harrowstorm DLC.

These sets of gears each have abilities, stats, and other benefits, allowing players to tailor their loadout to your specific playstyle. Furthermore, you can save the gear sets you find in those dungeons for later, more challenging missions because they are simpler to finish than others, like those from Wrathstone. Let's begin by discussing how to acquire the gear.

As mentioned, obtaining items from these new dungeons is easier. The latest gear sets can be produced by grinding the Unhallowed Grave and Icereach dungeons inside the Hollow Wastes (Bangkoral) and northern Wrothgar, respectively. You won't have much trouble because each boss in these dungeons can always drop different objects from a set, making it much simpler to gather them all. Additionally, you can exchange the pieces you have collected with other users/players to complete the sets more quickly. Before trying to enter and search the dungeons, it is advised that you be at least CP160 and Level 50. 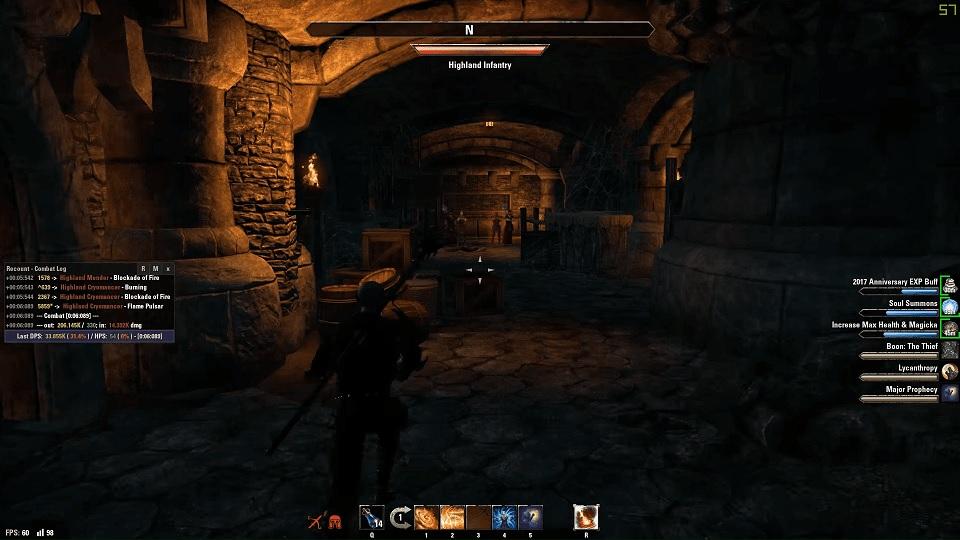 Sets in the Icereach Dungeon

Titanborn Strength consists of medium-sized armors and jewelry traits. There is a total of five pieces available in this set. This set is best suited for physical DPS characters skilled at balancing the risk of fighting while low on health to maximize their damage. The increased Physical Penetration allows your attacks to penetrate your opponent's armor, and the damage bonuses will enable you to take down enemies with higher Health pools faster.

Bani's Torment consists of heavy armor and health jewelry traits. There is a total of five pieces available in this set. This set best suits players who enjoy playing the tank; it increases your Healing Taken, making your allies' assistance more effective. The set's 5-piece perk also increases your chances of survival against taunted enemies. Let's go over the various combinations and advantages of using these set items. You get a +4% Healing Taken with two items, and three give you +1206 Max Health. You can earn Maximum Stamina of +1096 with four items. When you get all five pieces, you are connected (tethered)to a nearby enemy for five seconds when you taunt them. Finally, you project Major Maim automatically to your opponent while tethered, reducing their damage by 30%.

Additionally, you receive Major Vitality, which boosts a player's Healing Taken up to 30%. However, there is a range limit to the tether. If the enemy is farther than 8 meters, the connection/tether is broken. This effect can be activated once in 14 seconds.

Hiti's Hearth is a Light Armor set with the Arcane jewelry trait. The set comprises a total of 5 pieces. This set is ideal for healers, as it allows them to recover their magical abilities faster and adds the Health Recovery benefit of Warming Aura when the entire set is worn.

Regarding the combinations in this set, two pieces give you +129 Magicka Recovery, and four pieces give you +1096 Magicka Recovery. Get your hands on all 5, and whenever you use an ability to heal yourself or an ally, you will begin to emit a Warming Aura for 10 seconds. While inside this Aura, you and your allies within this Aura get to restore their health at the rate of 1020 per second. The Aura also cuts Sprint, Block, and Roll Dodge costs by 5%. This effect can be triggered once every 12 seconds.

Mother Ciannait is part of the Monster Mask set. This set, unlike the other sets, has just 2 pieces. This set is best suited for spellcasters who prefer long-casting spells. Combat is less dangerous because it shields you from heavy damage bursts while casting.

One piece rewards you with +1096 Max Magicka, and when you have both the pieces, While in battle with opponents, try to channel a skill or use an ability that requires a cast time. These will allow you to use a shield. This will absorb damage up to 3000 for 10 seconds.

Finding it hard to compete in these Dungeons? Players must have the best equipment and stay well-stocked with the necessities to rank among Tamriel's most incredible adventurers. They'll require a lot of ESO gold (ESO Cash or ESO Coins). You can get them quickly if you know where to find them.

Visit our website MMOPixel to buy ESO gold. We only offer the best services.

Sets in the Unhallowed Grave Dungeon

Aegis Caller consists of medium-sized armors and Robust jewelry traits. There are five pieces available in this set. It can be extremely beneficial to melee DPS heroes. The skill to call and use a Lesser Aegis as a friend can give you a competitive advantage in a battle.

Moving on to the next part, let's discuss various combinations and benefits of using these set items. With two pieces, you get a +129 Weapon Damage and a +129 Stamina Recovery with three items. Having four times gives you a +129 Weapon Damage. If you get all the five pieces, when you use a melee ability to deal a serious strike, you can call upon the Lesser Aegis, which lasts for 12 seconds. After each second, it starts to spin its blades, managing to deal with 4880 Bleed Damage. This effect can last for up to 10 seconds.

Draugrkin's Grip consists of a light armor set with the arcane jewelry trait. There are five pieces in the set. This set is ideal for DPS spellcasters, as the extra Spell Penetration allows your spells to break through armor. Additionally, the entire set will enable a player to do more damage with their spells, which makes you a lethal opponent.

Let's go over the various combinations and advantages of using these set items. You get +1096 Max Magicka with two items, and three give you +1487 Spell Penetration. You can get +129 Magicka Recovery with four items. With five pieces, a 10% possibility exists that you will curse an enemy for up to 6 seconds with a mysterious curse when you directly damage them. 530 additional damage is dealt to cursed enemies by your skills. This can be activated once every six seconds. Grave Guardian is a Heavy Armor with the Health jewelry trait. The set consists of five pieces. This is yet another excellent tank set; it effectively allows you to act as a protector for both you and your friends, making you much more resilient to damage. Regarding the combinations in this set, two pieces give you Maximum Stamina of +1096, and 3 or 4 pieces give you +1206 Max Health. Get your hands on all 5. Next, you block and conjure an aura of stone. This feature will add 4430 to your and your allies' Physical and Spell resistance.

Kjalnar's Nightmare is part of the Monster Mask set. This set is much smaller than the others, with only two pieces. This set is ideal for spellcasters who want greater control in one-on-one combat. The perks allow you to rely on light attacks to save mana and stun your opponent frequently enough to gain an advantage.

With a single piece, you get +129 Spell Damage, and when you have both the pieces, when you use a Light Attack to damage an opponent, a Bone Stack is put on them for 5 seconds. Every second, one stack can be applied. After 1 second, a skeletal hand will attack an enemy with five stacks. The attack is unavoidable. It knocks the target into the air, leaving them stunned for three seconds. The attack instead deals 14500 Magic Damage if the target can't be stunned. For 3 seconds, an enemy with five stacks or more cannot add any more.